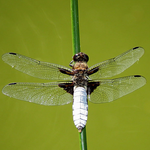 2 Two models were constructed: (i) for the entire data set covering both Europe and northern Africa, and (ii) only for Europe.

4 A test of metabolic theory identified strong non-linearity in the temperature-richness relationship, and geographically weighted regression indicated consistency with the theory in a very limited part of Europe.

5 The results are most consistent with the hypothesis that broad-scale species richness patterns are primarily determined by water–energy balance, similar to many fully terrestrial insect groups.