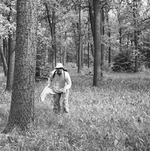 The distribution of Lopinga achine (Lepidoptera Nymphalidae, Satyrinae) in the Czech Republic has declined from thirty grid squares before 1950 to just one extant population, restricted to a single area of deciduous woodland. A review of historical sites shows that this species used to occur in various types of deciduous woodland with a relatively sparse canopy maintained by coppicing and/or grazing. The extant population inhabits mature woodland with a mean canopy cover of 60% (quartiles 50% and 65%), sparse shrubs and a species-rich herb layer containing plant species requiring dry, warm and nutrient-poor conditions. The larval host plants are the fine-leafed sedges, Carex fritschii and C. michelii.

In 2006, the total population contained about 10,000 adults but this may be an over-estimate, biased by male behaviour. Measurements of adult mobility, well approximated by an inverse-power function, suggested that all existing colonies are interconnected by dispersal. Continuing existence of the population depends on two conditions; nutrient-poor conditions for a diverse ground flora and a sparse tree canopy. While canopy closure is gradually increasing, the herb layer is threatened by soil enrichment due to the demise of traditional grazing, litter raking and grass mowing in woodlands.

Any future management to favour Lopinga achine should include both measures to maintain a sparse canopy and measures to export biomass, such as raking or mowing of ground flora or, preferably, re-establishment of grazing.