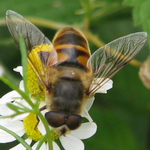 We used this source of data to estimate determinants of syrphid species richness in Central Europe. We examined the influence of three census-related covariates and five environmental variables on the observed or standardized (by rarefaction) species richness of 163 local syrphid assemblages. We also compared a large data set collected by a single author with a compilation of various sources. The covariates had mostly significant effects: increasing sample size and increasing sampling effort caused an asymptotic increase in species richness. The most effective collecting technique was entomological net, followed by malaise and colour traps. After taking into account the influence of covariates, the effects of geographical environmental variables (altitude, latitude and longitude) were more important than the effects of habitat variables. Syrphid richness exhibited a hump-shaped response to altitude and a latitudinal peak in the central areas of Central Europe.

Our approach illustrates the potential of literature data for studying large-scale variation among local species assemblages.